6 HR Horror Stories That Will Give You Nightmares 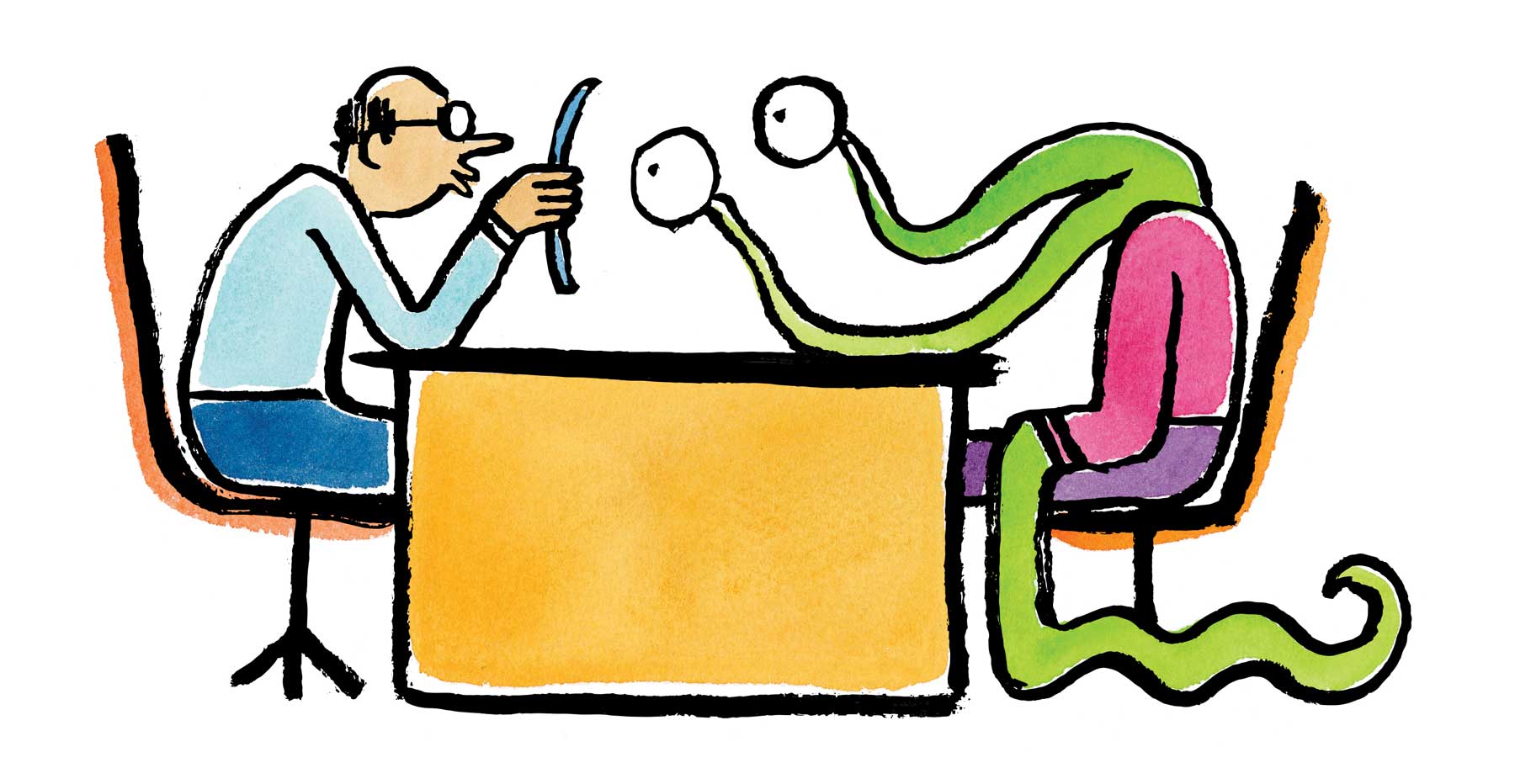 Ahh Halloween. It’s our favorite time of year here at Breezy—our jack o’ lanterns are carved, our witch hats are on and we’re braced for some of the spookiest HR horror stories around.

2020 has been a tough year for everyone and our HR experts have seen it all—from hidden underpants in the office to hiring managers who interview with virtual paper bags on their heads. 😱

So, grab a torch and be prepared for some shocking revelations that out-spook even the ghastliest horror movies, as we delve into the darkest depths of HR for some cautionary (and sometimes hilarious) tales.

Be afraid. Be very afraid.

While proper hygiene is definitely encouraged in the workplace, sometimes employees can go too far.

Dr. Melanie Peacock, founder of Double M Training and Consulting, recalls an incident where she had to speak with a lawyer about his cleanliness habits.

“This individual liked to take long runs at points during the day and therefore kept a change of clothing in their office. Sounds okay, but this person decided to leave their used underwear in desk drawers which various employees had to regularly access.”

This meant that whenever staff went to retrieve paperwork they were met with an unwelcome and often odorous surprise.

“Having to talk to the employee and ask them to stop using their drawers for their drawers was both an uncomfortable and frightening experience. In HR, the scary truth is often stranger than fiction. Perhaps this all boiled down to a new definition of legal briefs?”

HR Horror Story #2— Interview With The Vampire (And His Dad)

For businesses looking for the perfect new hire, interviews are make or break—and some ‘breaks’ are more memorable than others.

According to socialtalent.com, one hiring manager experienced his nightmare-interview when an interviewee turned up with his dad.

“One [interviewee] came in with an older gentleman… apparently his dad. The guy who was actually there to be interviewed never spoke, but the man in his 50’s comes in and the first thing he does is start trying to negotiate about pay. He’s come in on the assumption that of course his son was going to be hired, and now they just needed to hammer out the details on what his son was going to get in terms of pay and benefits.”

The hiring manager then told them that if the interviewee’s father would wait outside, he’d be willing to restart the interview.

Sounds reasonable, right? Apparently not. The two men declined the offer and left. 🙈

HR Horror Story #3— The Silence of the Hiring Manager

Katrina Collier, Facilitator, Speaker & Author of The Robot-Proof Recruiter, warns that if you don’t show your hiring managers the path of destruction they’re creating with their devilish behavior, your recruitment street cred will be permanently maimed.

“There is a worldwide shortage of developers and this global pandemic hasn’t changed this. Yet, some hiring managers think they can treat people in a manner they wouldn’t in-person just because they can use video to conduct interviews,” says Katrina.

Most of us know remote recruiting is the future. But unfortunately, some people still haven’t gotten the memo.

“Just look at this behavior, detailed in an interview review by a software engineer in August 2020: ‘I joined the WebEx [interview] and waited for more than ten minutes past the scheduled time before the lead joined. When they arrived, they didn't apologize for their tardiness or exchange any polite greetings. They also didn't turn on their camera even though I was required to turn on mine which made the interview even more awkward.’ Seriously, would you sit in an interview with a paper bag on your head?” laughs Katrina.

A crappy manager is a horror story that’s all too real.

Wendy Sellers, Author of The Asshole Whisperer: How to deal with crappy leaders and jerks at work, knows a thing or too about these real-life ghouls.

In her hilariously titled book, a friend recounts a horror story of the worst kind:

“First, [the hiring manager] said to me: “I'd love to hire you for this position, but just between you and me, I can hire a woman for much less than I'd have to pay you.” By the way, I'm a white male with several years of experience as a leader in a similar role. I was hired but not as the supervisor.”

That’s a pretty rough start, but it gets worse. 😲

“Not too far down the road, my manager said “Let's not call it ‘lying’” when I asked why they wanted me to be dishonest to a client’s business partner/spouse. I was in shock over my boss’s lack of integrity. The final straw was when I asked a question regarding the possibility of upward mobility and getting a higher pay rate… He [pointed to a much younger white male and said to me], ‘That's the future of our company. Your best bet is to learn the system and take all the projects you can.’”

When Wendy heard this story, she was totally appalled—but quickly saw the lesson behind the tale.

“My initial reaction was ‘Wow, what an asshole that so-called leader is!’ But then I thought, ‘Well Mr. Employee, [the manager] did give you key indicators in the interview that he was indeed an asshole.’ Always remember that an interview is a two-way street. Sure, the employer appears to have the upper hand, but, in the end, especially during a tight market where it is very difficult to find and retain good workers, candidates have just as much the upper hand (respectfully, of course).”

And she’s got a tip to stop this resident evil from returning to haunt the workplace.

“It takes a long time for people to change, and it's only with dedication and motivation. So, give them motivation. Report unethical behavior, statements, and actions to the leadership team, owners or even the news if you must. Let’s face it, you seriously do not want to work there anyway, even if you are feeling desperate, so why not fix the problem for everyone involved by standing up for the right thing. Respectfully report [bad] behavior to anyone at the company who will listen or report it anonymously. Be part of the solution.”

HR Horror Story #5— The Nightmare of the Crappy Job Ad

According to scare-chief Stephen King, there are three levels of horror.

The final of our HR horror stories will leave you shaking in your boots, because—brace yourselves—it incorporates every one of King’s horror levels.

This is the story of sloppy inclusion policies.

According to hrtechnologynews.com, one company made a shocking blunder when they decided not to take DEI seriously in a job ad.

“The company posted a job advert for a trainee anesthetist, seemingly mocking HR jargon. At the close of the online advert, the equal opportunities section—which normally contains provisions around diversity—was replaced with the phrase ‘usual rubbish about equal opportunities employer etc.’. The advert understandably riled Twitter users so much that an inquiry was launched.”

HR Horror Story #6— The Return of the Early Candidate

No one likes a late candidate, but it is possible to arrive too early.

HR expert Dr. Marcia Robinson explains: “An applicant showed up two days before the interview, came to HR, introduced himself and said he just wanted to make sure he found our office on interview day.”

The team was impressed at first—but then it got strange.

“The following day (still a day before the interview), the same candidate showed up again. He said the same thing. We started looking at each other in HR like ‘What is up here?’”

The actual day of the interview finally came, and Marcia’s team wondered what would happen next. Like a badly-timed ghoul, the candidate appeared way earlier than invited.

“The candidate was scheduled at 11am—but he was found sitting outside the HR office at 8am,” says Marcia. “He just sat there silently until the interview.”

Needless to say, the creepy candidate didn’t get an offer—although he did call back for days to check his status.

It’s a scary world out there (especially at this time of year 🎃) but with the right attitude, a great team and supportive tools to help you on your way, you can make sure you don’t have to deal with an HR horror story of your own.

So, beware the ghouls and good luck with your hiring!

Join the thousands of companies hiring with Breezy today. 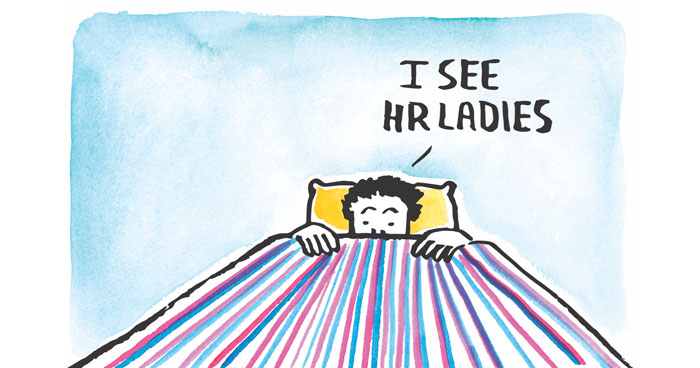 The World According to the Evil HR Lady: AI, Analytics, and Why It's Cool to Be Average— Interview with Suzanne Lucas

Ever feel like this HR tech thing has gone too far? The Evil HR Lady is with you. In this exclusive interview, Suzanne Lucas shares her expert insight into the world of talent on how to keep it human in the face of endless digitization. 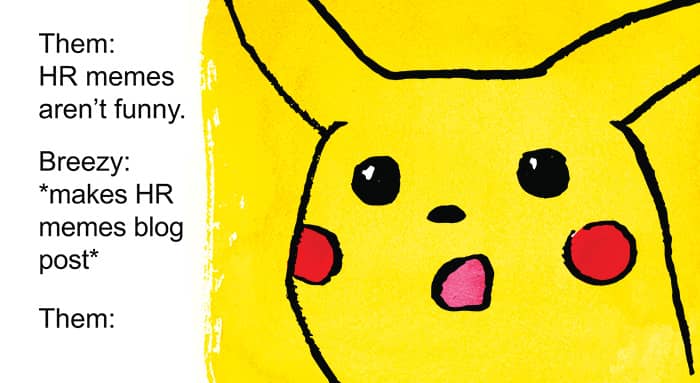 These 16 HR Memes Pretty Much Say It All

Say a lot with a little using the best HR meme for any workplace situation. From office HR memes to HR memes just for covid, these HR manager memes say it all. 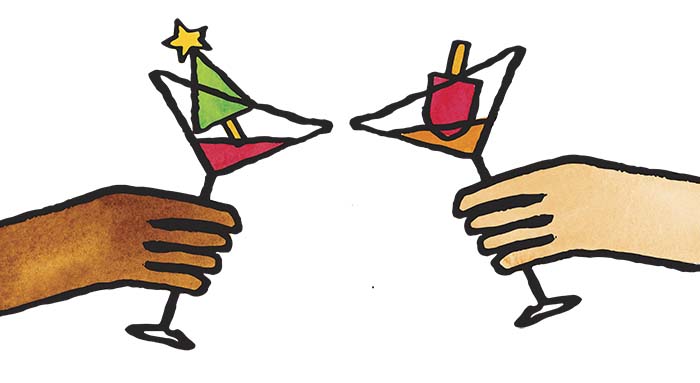 10 New Holiday Ideas for the Workplace: How to Keep It Fun and Inclusive

There’s no shortage of holiday ideas for the workplace, but which ones will make every member of your team feel included? Try these simple party ideas for diverse teams.